by Daniel Ramirez on September 13, 2017 in Entertainment, Music, Austin,

[Author’s note: This show was on the eve of Hurricane Harvey hitting the Houston and Gulf Coast areas. It seemed poor timing to release the review while so many of our neighbors were in peril. Mr. Lovett’s show was to be the first of two, and the second night was canceled for similar reasons. Should a make up show be scheduled, do yourself a favor and buy a ticket. It is a decision you will not regret.]

If there is a portrait of humility, it surely must be Lyle Lovett. He isn’t soft spoken, as one might presume. Instead, his softer voice belies something more. He is, in many ways, the zen form of quiet cool. It is clear from the very moment he sets foot on stage that he’s on home turf. And while, yes, the show is in the very core of his fan density in Austin, Texas, that isn’t the home turf he wields such an advantage over. No, the stage – any stage, it would seem – is where his home field advantage is in full force. Backed by the end-all tightest band since Ray Charles’ ensemble, it might not be too difficult a task to lord over this domain, but that still doesn’t fully explain this level of ease. Even Ray wasn’t this relaxed. Even Willie doesn’t come off as THIS relaxed, and Willie enlists help with his relaxation. This level of relaxation is only exhibited by one who knows beyond a shadow of doubt that they are comfortable in their skin and in their home. This level of languid cool belongs solely to him.

None of this is to say that Lyle Lovett, in his decades of touring shows, has grown lazy. In his dapper best suit, he glides around the stage, snapping the beat and jumping in and out of tunes as the need arises. The band is a murderer’s row of talent, with each taking a master turn for instrumentals, none of which resembles the shameless grab for attention that most solos do. Instead, they’re playing a seamless jazz, bouncing off one another, all with Lovett’s signature brand of ease. His longtime duet partner, Francine Reed (for whom “Wild Women Never Get The Blues” is an appropriate cover song and moniker), completes the picture of a band that could weather any storm.

And it wasn’t long into their set, a few classic covers (“Gee Baby, Ain’t I Good To You” among them) and a few classics in, that the audience forgot completely that a hurricane was at the porch of the Moody Theater.

This isn’t country. It isn’t folk or rock. The closest thing one can compare Lovett’s set to is the legendary soul tours of old – Sam Cooke and Otis Redding – where there isn’t a song that they don’t know or can’t play. Still, hubris never takes the stage alongside Lyle or his Large Band. Lovett fills in transitions from song to song with another staple of his shows, the stories that make him the “guy looking over your shoulder to read the paper.” He would absolutely be the best friend to have, and it’s clear from his banter that adventures with him would rival your best stories.

By the time he’s gotten to “That’s Right You’re Not From Texas,” his magic has worked and a crowd that felt like a fan club has become a family. This is home atop home, and the easy exchange between band members has transferred to the audience, and they’re passing love back and forth, band to fan and back…every joke lands and every pause is full of joy.

It’s no wonder that the band makes them sound like a soul troupe…several veteran members are from Muscle Shoals, arguably the birthplace of soul; and the storied Muscle Shoals horn section that backed the pillars of rock, soul and r&b is well represented. They take their cues from knee bends and looks across the stage. They swap rhythms without a glance. It’s supernatural and yet still eclipsed by the silk comfort that pours from Lovett’s voice. The voice, confident but rarely loud, further reinforces his humility, flying past the worries and the worst fears and landing at one’s heart with no resistance at all. It cracks and struggles, but does so at the perfect moments, as though those old creases and wrinkles were meant to be there. When he sings “this old porch” and dedicates it to his friend Robert Earl Keen’s daughter, it defines so much about the man, the state he calls home and the people gathered to watch and cheer him on. 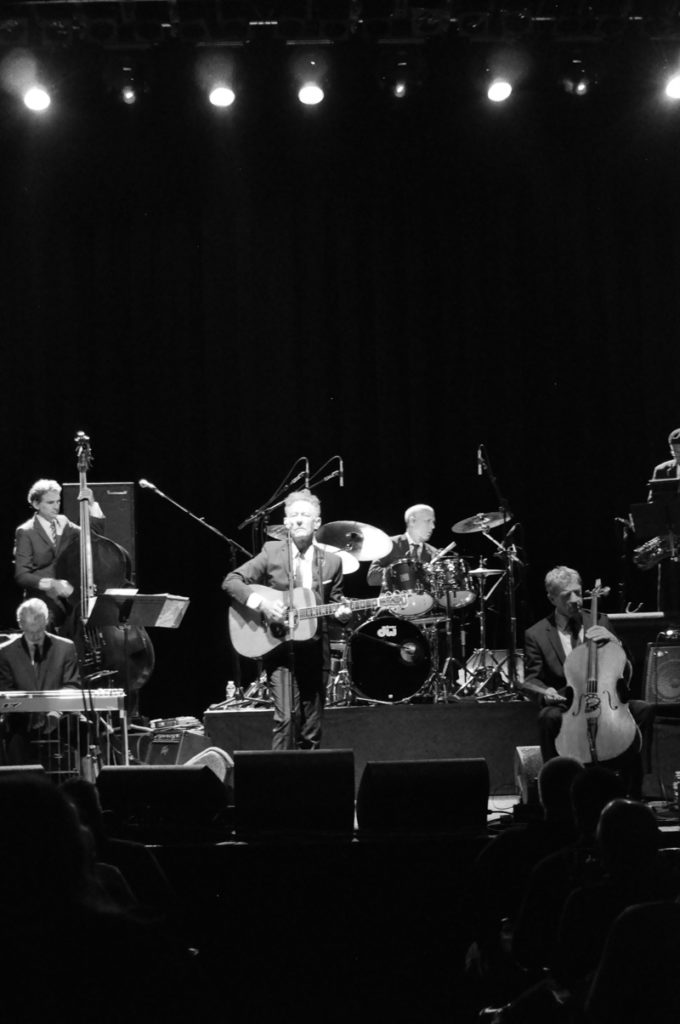 And just when it cannot possibly get better, Shawn Colvin strides slyly on stage, filling the space Lyle’s voice has now carved out for her. “If you love me, say you love me,” they sing to one another. And it’s all so easy and then it happens. Colvin and Lovett duet on a Townes Van Zandt legend, “If I Needed You.” It is nothing short of peak Texas, and the pervasive idea is that this is a living room, where a few of the cousins are singers, a few more have brought their instruments and we’re gathering inside to ride out the storm, playing every song anyone knows and loves.

He turns the entire stage over to the friend who gave him his first chances to play Austin, a man named Tommy, whom he credits with getting him his first gig in Austin. Lyle just wants to return the favor, even if the audience is led to suspect that he’s done it before. This is how Lovett works. He is a noble man, in a world that often slaughters nobility with notoriety. And before it’s over he’s turned the stage completely over to his fiddle player, sitting on stage with an pride in his band member’s mid-set offering, passing the baton yet again from fiddle player to mandolin player. Lovett is so deferential – in a profoundly genuine way – that it doesn’t occur to many that they’ve been in their seats for over 2 1/2 hours.

When the inevitable request call came in from the crowd, Lovett kindly looks the way of the voice without a shred of malice or exasperation in his eye or his inflection and explains, “We’ll do it, sir.” Three songs later, there’s a pause and Lovett says, “I want to thank that gentleman for asking for this song,” and launches into “If I Had A Boat.” The night didn’t end, and there wasn’t a soul in the house who would want it to. As Saturday was looking to slumber and Sunday crept quietly in, Lovett invited all of his guests on stage to join a Houston gospel choir, so he and the Large Band could take everyone to church. This is the spectacle. This is 26 musicians on stage, working with the seamless ease that radiates from the center, from Lovett himself. And it is the finest way to end a legendary show that is, at the same time, one-of-a-kind and something this band does nightly. Truly, he is one of the state’s greatest treasures, and over the decades of his fame, it has never gone to his head. This is a study in what it means to be humble. This is Texas, pure and simple. This is Lyle Lovett.