So you want to try authentic legendary Texas barbecue while in Austin? Thousands of visitors head to Austin to be at SXSW and because of their love for barbecue and the attention they pay to publications and television programs, they all want to make their pilgrimage to “Barbecue Heaven” – namely, James Beard Award-winning Franklin Barbecue. Franklin is on every carnivore’s bucket list, and justifiably so. But, we’re here to tell you that if you’re headed to Austin for SXSW and want to make the most of your visit by paying your respects to the Gods of all things barbecue, you’ll need to know your way around. First, you have to know that the line for any of these places starts building MUCH earlier than you’d imagine. For Franklin, in particular, we’d wager that during SXSW if you’re not in line by 6:30, you’re really taking your chances. 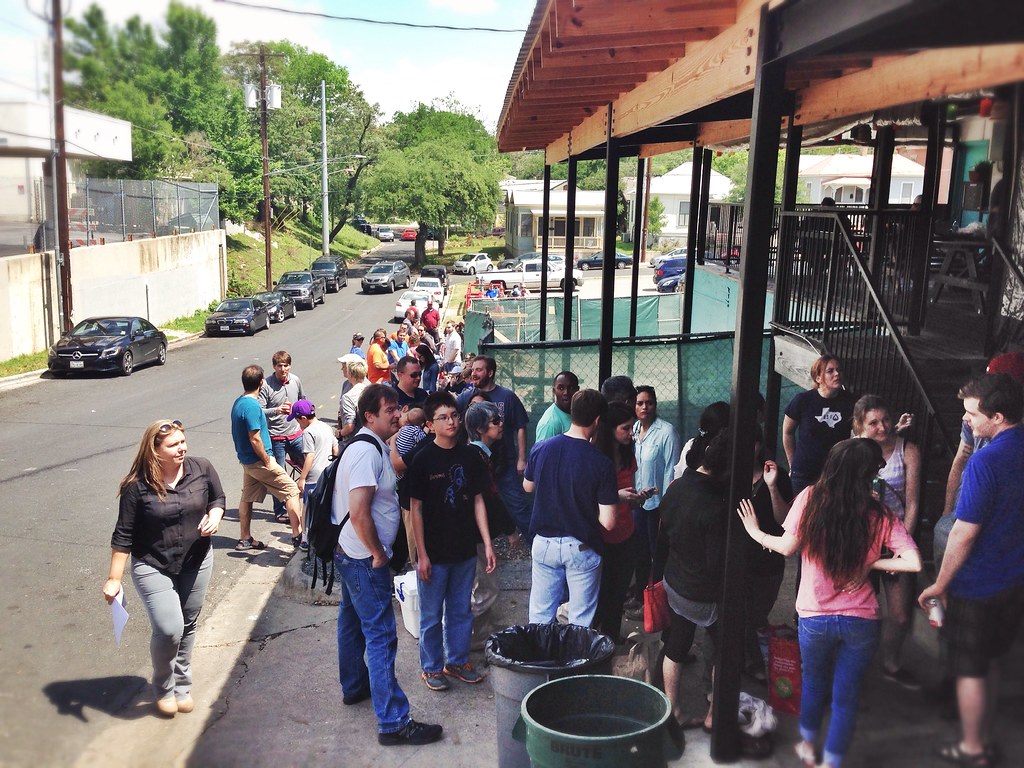 The problem with the Franklin line is not the 11am open time, it’s the line elasticity. 5am arrival almost always means you get food and eat the moment the place opens. That’s a 6 hour wait, but a guaranteed 11am eating time. At 6am, it’s maybe 20-45 minutes after 11 (or more). At 7am, it’s starting to be a huge gamble and can stretch out to be 1.5-2 hours after 11am. By 8am, when the line is usually cut off, the eating time is now 2pm or later. But, earlier arrival times offer the most benefit-versus-investment. If you’re there at 6:30am or earlier, a few things happen:

Rain, which can come at any time and on any day during SXSW, DOES affect the line of almost any barbecue place in town and keeps it smaller, but this again is an advantage of early arrival. Early arrivals at Franklin are under the awning of the building itself, and thus don’t get wet in inclement weather.

As for other options that will still blow your Texas-visiting mind with smoked meat nirvana, we’ve covered and recommended Freedmen’s Bar more than once. They were on the multiple lists as one of the best newcomers over the past couple years (it made them even more popular). They rarely run out of food, we’ve never seen a line and they have indoor seating and a great bourbon bar, if someone else is driving. All that considered, the quality of the barbecue (brisket) is heavenly and Evan LeRoy knows what he’s doing so well that he was named pit master for GE’s SXSW barbecue activation last year. This place has the best ambience of any of them, including the spots in Taylor, Lockhart and Luling.

Also on nearly any published list of the past five years, you’ll notice a curious name – Micklethwait Craft Meats. This one is one of the more interesting places. Their beef rib is as good as any other BBQ joint in town (Franklin only does beef rib on Saturday), and their sausage destroys every other sausage in Texas (we stand behind saying that, to Elgin’s chagrin, perhaps). Their line isn’t as intimidating, but there is NO indoor seating at all. The quality of the ‘cue (brisket – after all, we’re in Texas) is a mere notch below Franklin’s, and on one occasion, when our investigators did the Pepsi Challenge with everything BUT Franklin, lining up all the best barbecues in the Austin area and trying them blind, they won for best brisket, even against La Barbecue and John Mueller Meat Company, the two other heavyweights of the Austin area.

Speaking of La Barbecue and John Mueller Meat Company, they are both GREAT alternatives to Franklin. They’re equally  good, for very different reasons, which makes sense, since they’re related. Leigh Anne (the “L.A.” of LA Barbecue) shares the same name and parents as John, though they have far different temperaments. Like their personalities, La Barbecue slants toward the sweet side – with the best pork ribs in the city, and John leans toward the peppery – with the best bark of any – and we do mean ANY – smoked meats served in Austin. John will likely offer you a can of Lone Star while you’re in line, while Leigh Anne’s place will have a keg of some local brew on offer, in all likelihood. Both have one-hour waits if you get there an hour before they open, though my last reconnaissance showed that La Barbecue’s line was growing earlier in the day than John’s.

Parking is all street parking and for what time you’ll be looking at getting anywhere, you should be able to find a spot at the ones that don’t have a parking lot (Micklethwait and Freedmen’s both have their own lots – but Freedmen’s is behind the pits, not to the right of the entrance…they tow people who park in the 7-11 lot). Pay VERY close attention to the curbside signs, however. Times and zones are carefully monitored around SXSW.